GBWhatsApp, launched in 2014 is a modified application of the original WhatsApp messenger app which is created by third-party developers. In this mod version, users get all the WhatsApp features as well as some additional features that are not provided by WhatsApp.

One of the main features of GBWhatsApp is that the developers created another application, especially for GBWhatsApp users for stickers named “GBStickers” which provides 2500+ stickers across 65+ sections. Not only this, but users can also customize their stickers according to their needs.

You can also use some other features like a customized WhatsApp theme, send auto-reply, DND mode, change fonts, and many more which enhance the user’s experience. 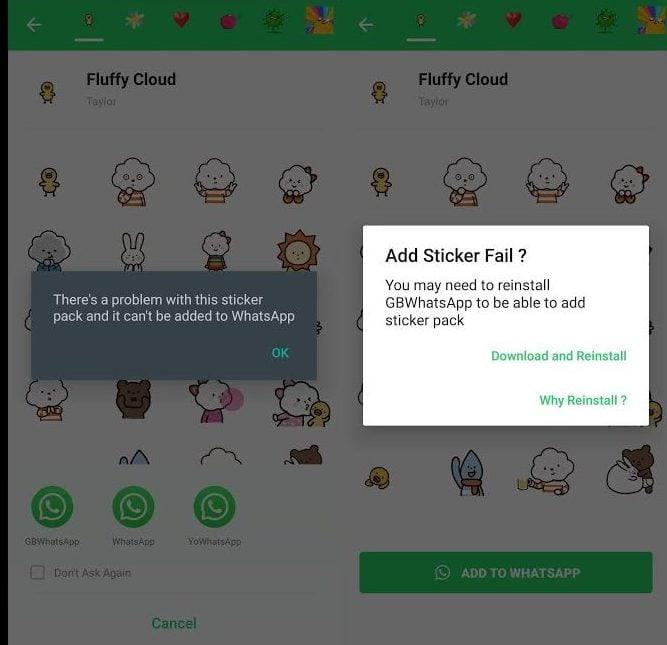 Recently, many users face problems in adding sticker packs to their GBWhatsApp accounts. Users are getting a pop-up message saying that there’s a problem with this sticker pack and that it can’t be added to GBWhatsApp. This issue is arising due to some bugs in the android system. This is causing problems in granting permission to add sticker packs to the user’s GB WhatsApp account.
To solve this problem, users can go through the following steps:-
Step1. Update GBWhatsApp to its latest version from GBWA.xyz.
Step2. Clear Cache memory of GBWhatsApp.
Step3. Reinstall GBWhatsApp after uninstalling the existing application.

GBWhatsApp is the most popular modded version among all the WhatsApp modified versions. This application is developed mainly for users’ privacy security. It is not only giving WhatsApp features but also features that are not provided by the original WhatsApp messenger application.